It started with a post on Facebook - a photo of some of my first day cover envelopes featuring writers. One of my followers spotted Sherlock Holmes among them, and an envelope transformation was commissioned. 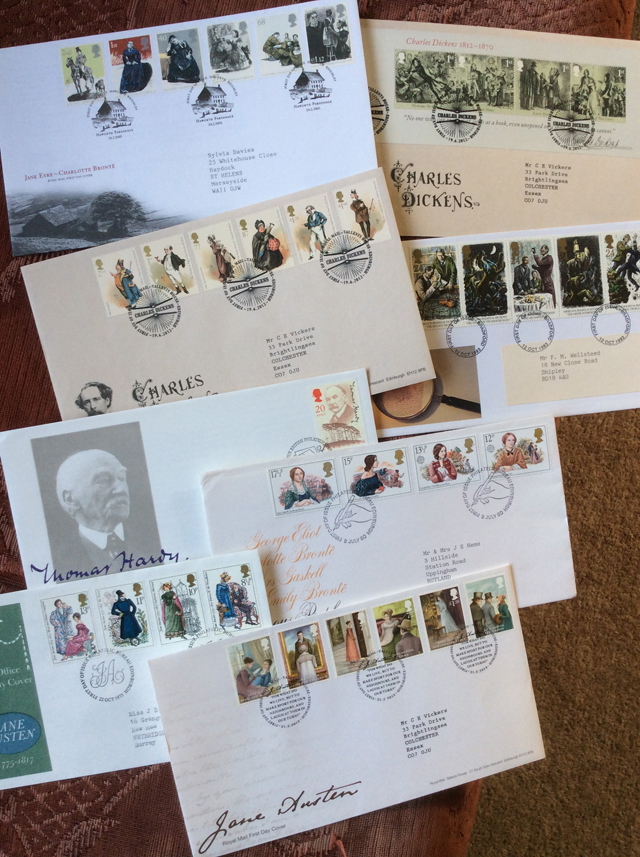 The stamps featured illustrations of five of Conan Doyle’s short stories, in wonderfully moody dark colours. I had an immediate idea to create a brooding Dartmoor skyline using the fabric I imagined Holmes and Watson would typically wear - tweed. 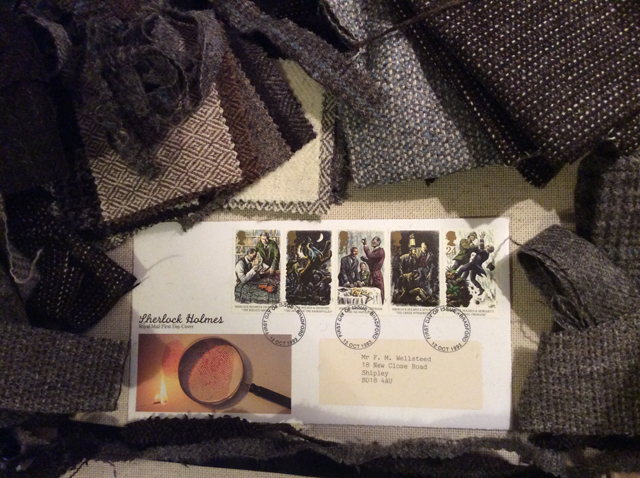 One stamp showed Holmes plunging to his ‘death’ in The Final Problem, so I decided to create the Reichenbach Falls around him using layers of tulle. 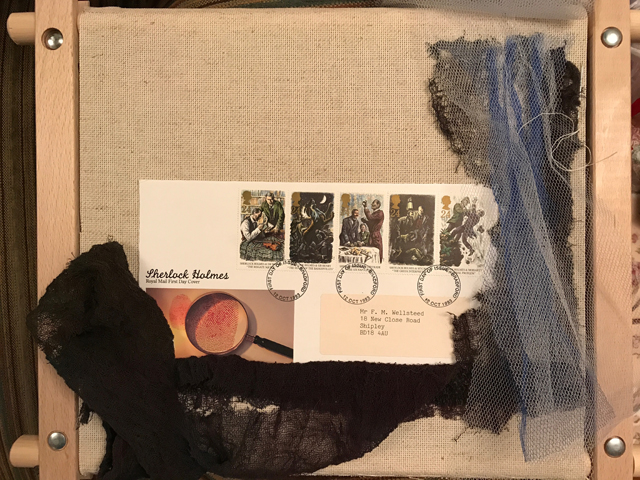 The background was built up using scrim, with sections of tweed added to represent the Dartmoor hills. Scrim was also used to create the dead tree. 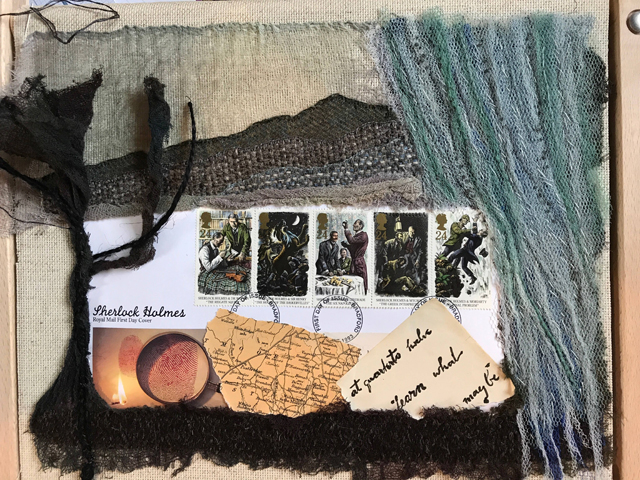 As we discussed the design, it emerged that my client was a great Sherlock fan, and extremely knowledgeable. She knew all the stories that featured on the stamps and wanted me to build in references to each one in my stitching - a trail of clues as it were. This literary wheeze really appealed to me, and so I took great delight in adding in appropriate details. 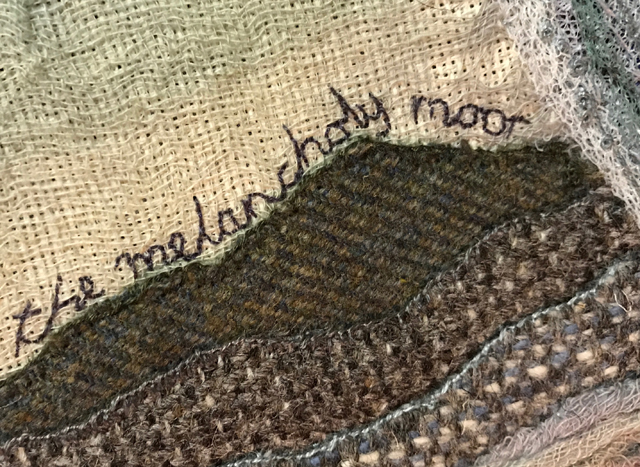 The Hound of the Baskervilles inspired the Dartmoor landscape and the embroidered bloody paw print. I came across a vintage book of road maps in a charity shop in the early stages of stitching the piece, and a fragment of a map of the Moor found its way in. A blank page from that book provided an ideal aged and tattered scrap on which to copy the torn fragment of a note that is an important clue in The Reigate Squire. An empty nest was created in a branch of the dead tree as a reference to The Greek Interpreter. 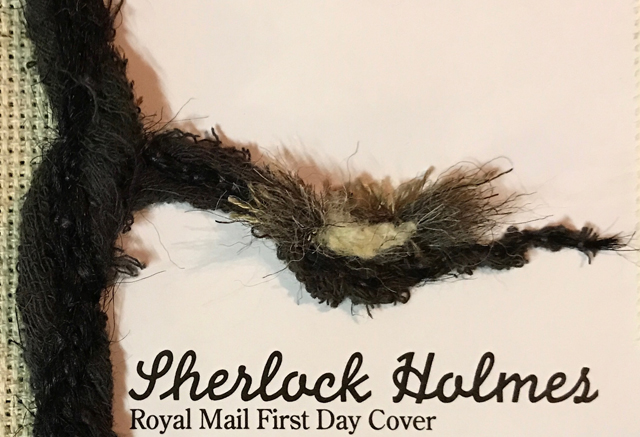 And the black pearl that Holmes is holding in the illustration from The Six Napoleons is also included - though rather hard to spot at first... 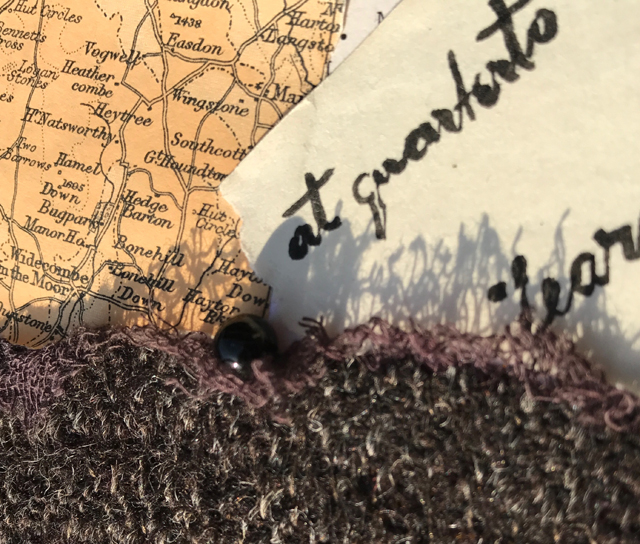 Finally, because I love a literary quotation, I added Dr Watson’s description of “the long low curve of the melancholy Moor” on the skyline. Creating this piece was a delight because of the many interesting details to consider. I completed it while on holiday in France in September 2017.

Happily my client was as pleased with the piece as I was, and left a lovely review on my Facebook page: “To say that I am delighted with my finished Sherlock artwork is an understatement. Sue somehow managed to take what I had visualised in my head and transfer it perfectly onto canvas. The finished piece is utterly stunning.” 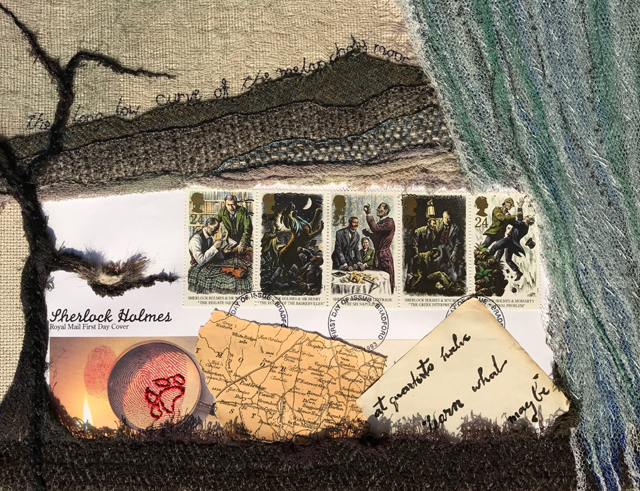 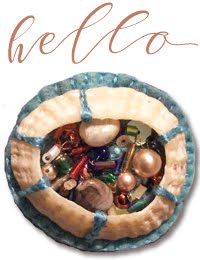 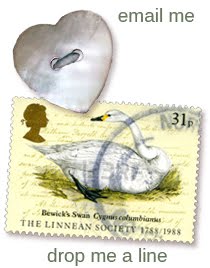